Who says you can’t teach and old dog new tricks 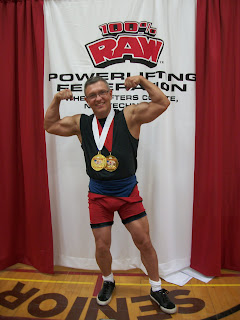 Well the end of the year is about to wrap up, and I for one have had an incredible year. I really want to know who said “ You can’t teach and old dog new tricks.” This old dog has tried something new and is excelling at it. I now am competing in Bench Press competitions and push pull events. I have done well in both and am excited to see what 2012 will hold for me. I will compete in at least 2 full power events. My friends you can teach an old dog new tricks.

The year started with a meet in January in Albany at Best Fitness. This was my very first competition in the realm of powerlifting. I saw a lot of good lifters there and was amazed at the size and strength of some of the bigger lifters. At this event I learned that for my weight class I was very competitive and strong enough to win for the weight class I entered. This prompted me to enter the USAPL federation and in February the ride began. I won that event for the Masters I division in the 75-kilogram weight class. I do not know to this day if this was a record in that federation in NYS because they do not keep raw records per division. The do keep them per division in the equipped lifts. That confuses me. Being a little disappointed that they do not keep raw records in that level of detail, Joined the 100% Raw Powerlifting Federation. This federation keeps records for all age divisions and weight classes. The record at that time for a 165-lb. male in the 44 to 49 age group was 259. I opened with a lift of 270lbs breaking the record with my first lift. Then on my second lift I put up 295. I missed my third lift when I lifted my head. At this point I was hooked and loving my new lifestyle. My next event was in June, the American Challenge, this was another 100% Raw event. This event is held Nation Wide at different venues at the same time. The lifts are compare and a National Champion is named. I won the National title for the 165-weight class with a lift of 297. Bumping my NYS record. In all actuality it was both a good and bad day for me. I was way to jacked for the event and missed two of my lifts because I did not wait for the press command on 2 of my lifts. This was a rookie mistake and one I will never make again.  However, with some help with some friends I entered the deadlift competition. Although I only had one good lift in the event I did pull 407 off the floor with ease. I would have had that lift had I not pulled it to fast or to high and lost my balance, the weight came back down for before the lock out and I was red lighted.
Next were the USAPL Nationals, at the time I sent in the entry form I only entered the Masters I division. I decided last minute to enter the open division the night before the event. I was glad I did. I won Nationals, which has put me on the IPF World Power Bench Press Team. While I still have a lot of money to raise for this event I am very excited to be going and will push hard to raise the money I need. The last event I competed in this year was in November. It was the Gobbler Open. One of my goals this year was to bench twice my weight. I did it at this event with a bench of 325. I had weighed in at 161.3-lb. Had not my foot moved which caused my butt to come up I would have had the lift. In any case I hit for my own knowledge with a pause. It has been a great year.

Throughout this year my diet has been consistent. I have had a few bumps and bleeps along the way, of course I have. After all no one is perfect. My point here is that although there maybe be mistakes made in diet or exercise, or even lifting during competitions there is always something to learn from the experience and you can and will do better next time. I have set some lofty goals for myself for 2012. I will set small goals along the way. I will achieve the goals I set and I will continue to eat properly and exercise with intensity to achieve them. You and I can both resolve to make 2012 the year of new achievements. Set your mind to making the changes you want and need to in life and you and I will get to where we want to be.

Have a very Happy New Year!

Tip: Enjoy bringing in the New Year, however please do not drink and drive. Drive sober, and safely and look out for the other guy on the road. He may not be as responsible as you are!