Old age and treachery will beat youth and skill any time” 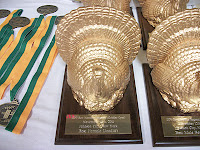 Quote: “Old age and treachery will beat youth and skill any time”  Proverbs

Good Morning, Team OMG is coming to the next NYS Championships March 2012 in Fayetteville NY. That is right you heard it here. Team O old M men G gray will be showing the youngsters how it is done. LOL At some of the meets I have been at there are teams put together and they compete for a team award. A few of my friends who, let’s just say are advanced in our years are putting together a team for such meets. Just because there is snow on the roof does not mean that there is not a fire in the furnace. This is going to be a lot of fun and we will do very well. Unlike most teams, we are not centrally located and we need to communicate and help each other over the Internet. This will be very interesting. As we get complete buy in from everyone and I have his or her permission I will list the team here.

Let’s get back to talking about the Gobbler Open. Brian Espino did very well in the deadlift last Saturday and he even hit a PR on the bench. One of the things I enjoy at these events is the camaraderie. Every lifter is always there to help and encourage the other. Each lifter is different though and Brian is one of these guys who are like the eye of the hurricane. Quiet and deliberate but strong and unyielding. During his bench he was able to hit his new PR with encouragement from his friends. Would he have hit it without the encouragement, probably but we will never really know.

The deadlift competition saw many lifters, some as young as 11 years old. Several 100% Raw World Records fell that day one of which was for the women. Tierney Wallace set a world record. She pulled 350.5 lbs., a record for her weight class. Brian also pulled a new NYS Record and I have his lift here. He just started pulling sumo again and originally was not going to go for the record. Somehow he convinced himself to go for it. I guess it was because his first two attempts were completed so easily. Ray Linduski did something that took a lot of courage; he listened to his body. After his first deadlift he tweaked his back was obviously in a bit of pain. He chose not to lift the next 2 attempts and probably saved his back so he can return again stronger than ever. Great job to all the lifters.

Squats for me today. Not going heavy because my main focus is my bench right now. I want to ht 357 raw by June of next year. I know you are thinking “Jim you will hit that easy, you just put 22 pounds on your bench since September”. I wish it was that easy, as the weight get heavier and I get older gains come much harder. So I figure giving myself till June next year should be all the time I need to gain the strength I need.

Tip: Sleep is vital to muscle recuperation. I am suffering from lack of sleep today so I hope tonight to get to bed early and get a full 6 to 8 hours. You should
Posted by Jim Kipp