The amazing story of Fred Seeburger

Rant and Tip for July 5, 2012
Quote: “A healthy outside starts from the inside” –Robert Urich
Again a quote I can relate to. As you get yourself healthier through diet and exercise you will see benefits in your blood work  and other health monitors. When those things happen you tend to look better on the outside as well.
Exercising may have a hidden benefit that many people over look. I have to friends who have had a traumatic event in their lives. Both of them are avid strength training enthusiast. One is a body builder and the other is a power lifter. My body builder friend had fallen off a roof and ruptured his spline. His doctor was amazed at how quickly he recovered. 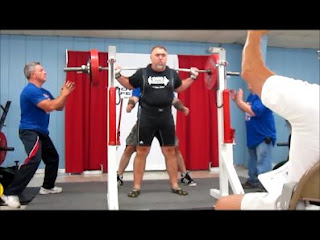 The powerlifter is Fred Seeburger, he is about 51 years old and had a stroke October 23, 2011. He was very active and trained regularly. He had a 325 pound bench, a 550 pound squat and a 550 pound deadlift. He walked and then ran a 175 stair staircase near Syracuse University. The last time he did this before his stroke he walked up and down 2 times, ran it 3 times, then cooled down with a walk 2 times.
Fred had his stroke in October and he had been planning on competing in a meet in November. He informed his doctor of this and the doctor told Fred he was not going to lift anything, and finished the statement “And I will say your lifting is done!” Fred retorted with an expletive, that I cannot repeat here. LOL. 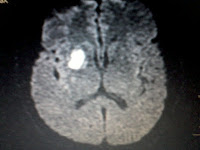 Fred recanted to me that he sat on the couch for weeks, walking was exhausting, he and his wife shopped for a new couch and he would walk a 100 feet and need to “test a couch”. In late November, his Doctor, Dr. Malek gave him a 20 lb lifting limit. Fred tried to argue and the good Dr. showed Fred the scan. The scan showed 2 strokes and between them in a 1mm space is his nerve bundle that operates his arms and legs. Fred cried at how close he was. Mid stroke his left side was paralyzed and his right so weak he barely got off the floor using his right leg. He was mentally drained.
He went back as a Tech Teacher and had next to know energy to make it through the day, his temper was short. I can only imagine what the man was going through emotionally and knowing Fred and his competitive spirit I am sure this is where the short temper came from. 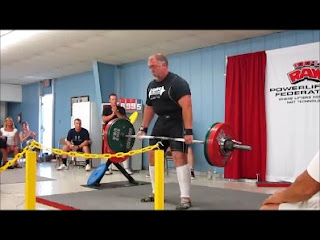 February 2012 Fred spoke with the Neurosergeon. The talked and Fred pleaded for an increase in the weight limit. Fred was thinking 200 lbs, the doctor said 60 lb total!! Fred turned to his wife, Julie, and said I will sit on the couch get fat and die of a heart attack! She turned and spoke to Dr. Deshaies and said “You do not understand what he does” She then gave him a lesson in Powerlifting. The Doctor looked at Fred and they spoke some more. Fred reassured him that he was not suicidal and wanted to live, just not on a couch! The Doc looked at the scan and said OK, no limit ( this was probably because he thought it would shut Fred up!)
Fred went back to training at the Fayetteville, YMCA and kept his word. He started with light weights and that felt heavy. From February through June 1st, he trained gaining strength in every workout. He opted to do a meet mid June in the 100% Raw Powerlifting Federation. The event was the American Challenge. A national style event that takes place in several states all around the same time. While you can win at the event itself you numbers are included for a National Title as well.
Fred was competing in the Master 2 SHW division, which he had to eat copious amounts of food to make, some of the records were open but the Deadlift record was 458.6. Fred chose his opening lifts light. He opened with a 303 lb squat, a 220 lb bench press and a 352 pound Deadlift. Fred’s second lifts were 387, 295, 440. Lifters tend to look out for each other Fred originally wanted 420 for his deadlift but Laura Delay tapped her pen and encouraged the 440 out of Fred.  Fred’s third lifts were 440, 305.6 and 512.5. The last event was the strict curl where Fred curled 148 pounds for the World Record for the 50 to 55 age division SHW. Fred sent pics to his doctor and the was thrilled with Fred’s results. The Doctor’s words were ““Wow!! Congratulations! That is absolutely amazing Fred!
I am so glad to hear how well you are doing!
I would love to have you share your story with other aneurysm patients if you are interested in doing that.
We could arrange through our Aneurysm Support Group or even through SUNY Upstate.
Absolutely no problem if you decide not to. I am just so happy to see you doing so well and breaking records!!
Thanks again for sharing your story with me and the pictures!”
Now you are may be very impressed with Fred’s accomplishments, as you should be. However you may be asking why include this in your blog. Well my point is, and again this is all in my humble opinion, those of us who exercise regularly are creating little tears in our muscles on a regular basis. These tears heal on a regular basis. Since our bodies have to repair itself so regularly it becomes very efficient at it. It seems the more you work out on a regular basis, when you do have a surgery, or a life altering experience like Fred’s your body can find a way to come back from it better than those who do not work out on a regular basis.
Nice work Fred.
Have a great workout!
Posted by Jim Kipp