Quote of the day

“The difference between impossible and the possible lies in a man’s determination.” Tommy Lasorda

Here is a post from my friend Brian regarding his experience at the USAPL Powerlifting National Championships.
Brian is a determined individual and will reach his goals 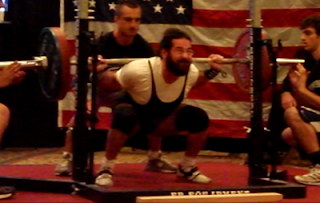 My trip to USAPL Raw Nationals
About a year and a half ago, I made the decision to return to graduate school and move to the Binghamton, NY area. I was aware that the 2011 USAPL Raw Nationals would be held in Scranton, and marked my calendar for this meet more than a year in advance. The only requirement to enter was to have a recorded total in a USAPL sanctioned meet within the last two years. I had already recorded a total in the 198 lb weight class from 2010, but wanted to compete in the 181 lb weight class. After pulling out of a contest in December due to an injury and worse yet, food poisoning three days before the meet, I competed in USAPL meets in both February and May. After relearning how to squat I totaled a paltry 1000 lbs in February and a more respectable 1124 lbs in May in the 181 pound weight class. A year ago I competed in a relatively large meet in North Carolina, but USAPL Raw Nationals would be my first really big meet. Upon seeing the roster of lifters which included each person’s qualifying total I knew there was no chance in hell that I would win, and decided to shoot for some small personal bests. My previous best meet lifts in the 181 pound weight class were a 358 lb squat, a 281 lb bench, and a deadlift of 485 pounds. Also one of my goals was to not finish last.


The last few days before the meet, I weighted consistently around 180 pounds, so weigh-ins would not be a problem. With Scranton being only an hour away I decided to stay at home and drive the morning of the contest. The night before I got to bed miraculously early, for me at least, and fell asleep a bit after midnight. Unfortunately I woke around 3:30 and never fell back asleep. Seems I rarely get 4 or more hours of sleep the night before I compete. Upon arriving at the venue, I weighed in at around 178 pounds. I saw that I would be in the second flight so I figured out when I would start warming up. I wanted my squat opener to be easy so I opened at 314 lbs. My last warm-up was 295 and went up easily.
While squatting during contests I want to go low enough for the lift to count, but not too low to make it harder than necessary. I asked my friend Frank Panaro to stand on the side and tell me when I was deep enough. I go down slower than most other lifters, and then reverse the weight upon an audible cue. Opening at 314 was quite easy, so my second attempt was 347 lbs. This is a weight I have not missed in a long time. Upon Frank’s cue, I reversed the weight and finished the lift successfully. For my third attempt, I called for 369, which I have squatted in my basement many times, but not yet during a meet. Again I descended slowly and upon Frank’s cue, I stood back up. To my dismay, the announcer said ‘no lift’. I still to this point am not sure what went wrong. Frank has been lifting for a long time, and is a judge himself, so I trust his judgment on the depth. Looking at the video of the lift, it looks identical to the previous attempt which recorded three white lights for a good lift. Afterwards, I had about a half dozen random people come up to me asking what happened, since they thought it looked like a good squat. While the 10 kg difference didn’t make a difference in my final placing, I am a bit peeved to miss out on the PR attempt.

Next up was the bench. About three weeks before the contest, I adjusted my grip and my form to alleviate the pain to my left shoulder from the beating it was getting from squatting. While I prefer to not change my technique this close to a meet, I felt it was necessary. Plus I was hitting weights over 90% of my PR with the new form without liftoffs at home, so I felt a PR attempt was possible. I opened at 270 lbs, which is common for me. It went up, but a slower than it did back in May. On my second attempt I played it safe and went for 281 lbs to tie my PR. Again it went up, but it was a struggle. Based on previous experience, I could tell that I had nothing left in the tank, so I passed on my third attempt.

I still had a chance to set a PR for my total, with a big deadlift. The last few months I trained deadlifts less than normal, but my past tells me that when I get stronger in the squat, my deadlift also gets better. The last two weeks, I trained my deadlifts mostly to develop speed off of the floor, and the last session produced a pull of 385 lbs from a short deficit. My last warm-up deadlift was 385 lbs and felt easy. One of my current goals is to finally get over the 500 lb deadlift barrier. I opened at 413 lbs, and the weight came up without any hesitation. Since the lift had good speed, I thought that 500 pounds was possible, and I jumped up to 457 lbs. As a side note, I record my lifts and use to the timer to measure how fast I move the weights. The 20 kg jump would then be followed by another 20 kg jump to 501 lbs. I set up as I normally would, reached down, grabbed the weight, and within 2 seconds had locked out 457 lbs. Next would be my attempt at 501 lbs. Not only would this weight get me over 500, but it would be enough to make up for the missed squat to give me a PR for my total. Following my normal routine, I started my pull. Back in June, when I attempted this in a meet, the bar got away from me a bit and it stalled about 3 inches shy of my knees. This time I did a better job of keeping the bar close to by shins, but again it stalled, this time at knee level. As the bar slowed, my left leg shook, and I felt my kneecap, hitting the bar. This is how I could tell how far the bar rose. Needless to say, I missed the lift.

I finished the meet with a total of 492.5 kgs or 1086 lbs, good enough for 17th place out of 20 in my weight class. The winner in the weight class went over 700 kgs which included a deadlift of over 670 lbs. My total would have tied me for first in the meet that I won back in May. However, the national competition attracted a large amount of very strong lifters. At most meets, there are a few deadlifts over 600 lbs. This time it seemed that every guy in the 198s and higher was capable of that. In addition, to the quality of the lifters, the meet was well run, especially considering the size with well over 300 competitors. The location in Scranton most likely bumped up the turn-out, as there were over 130 lifters from Pennsylvania, New York, and New Jersey alone. Being between the ages of 24 and 40, my only option is to compete in the Open division, which is open to lifters of all ages. Not only does it include competitors of similar age, but also college aged athletes and also veteran lifters, who have been competing for longer than I have, who don’t want to be the only ones in their age and weight class. Therefore the competition is intense. This tough competition has led to a few goals. Among them is that in two years, the USAPL Raw Nationals will be held in Orlando Florida, not far from where I grew up. My goal is to return then with the goal of placing in the top half of my weight class.

Tip:
No goal is reached with out hardwork. Brian works hard and I have no doubt he will be pulling 500 in his next deadlift in a competition.
Posted by Jim Kipp