Luck is what happens when preparation meets opportunity 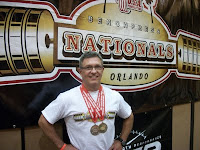 I cannot say it enough how preparation will make or break you. Some people have said to me that I was lucky that I could lose the weight. Maybe I was, but I think I was “lucky” because I prepared and planned. I did not will the fat away from my body. It was not through luck that my blood work came in line. It was through diligent preparation that got me to the fitness level I am at. I am happy and healthy now and no matter what happens from this point forward in my life, I know that if I prepare properly I can stay that way.

My son is pretty funny, and I think a lot like most people. He has seen me go to meets and win and at time set some records for my age group. Last year he was under the impression that it was an easy feat to do this. He thought that if he went to a meet he could set a record just by doing his best that day. This is typically not the case, most of the time you are competing against yourself trying to hit new personal records. I train hard 5 to 6 days a week for an hour a day and then throw in some cardio as well. As a meet gets closer I will add more cardio. With the meet on October 27 coming up, my cardio will be increased this week. What my son did not see was the intensity spent in the gym. Most of us only see the end result of what an athlete puts into just getting there. Olympic athletes and professional athletes train hard to get where they are, we just don’t see it.

It is squat night tonight. Need to figure out what my first and second lifts will be for the meet at the end of October. The third lift always depends on how the second lift goes up. Again here is the planning and preparation coming into play. It is not like I can show up and just pick a weight off the top of my head. I have to have a general idea.

Tip: Keep a journal and plan your meals and exercise program in it. Or use an online program like fitday.com